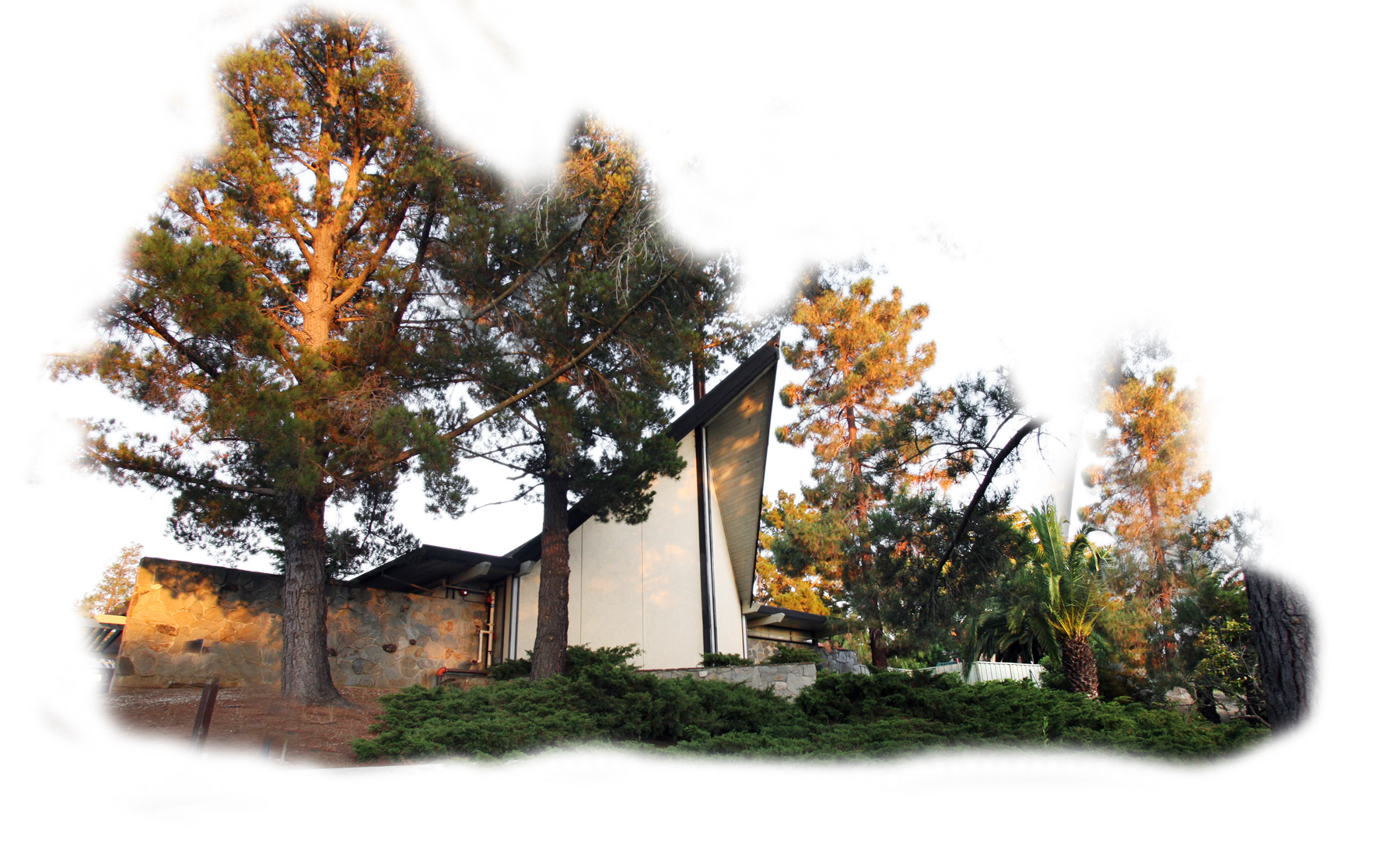 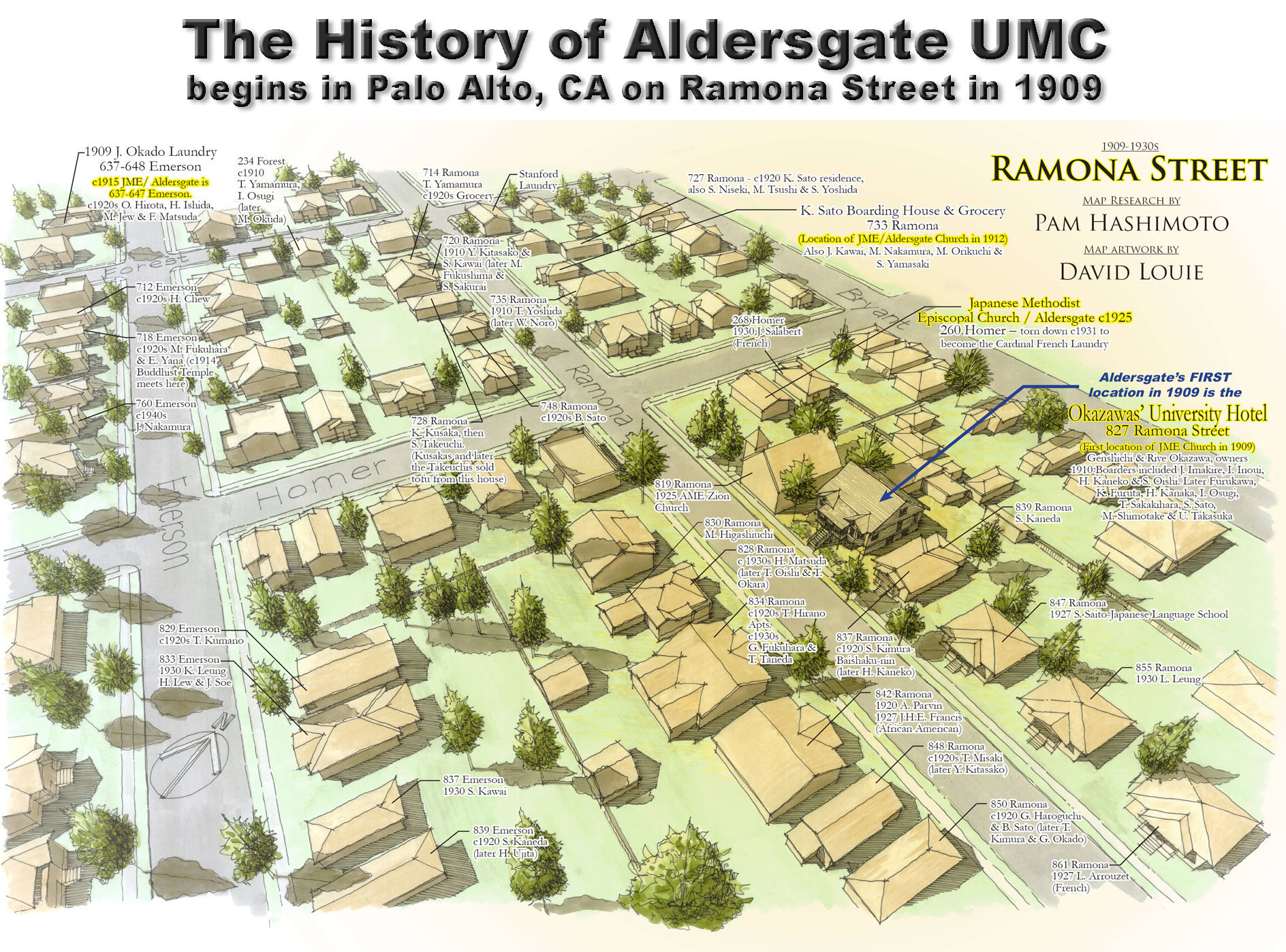 If you could walk down Ramona Street in Palo Alto more than 100 years ago, you might notice the scent of fresh tofu being made at old man Kusakas’ place.  You walk around back, and hand Kanichi and Chiyona all of 10 cents.  With food on your mind, step directly across the street to do your shopping at Kihachi and Riki Satos’ Grocery Store.  Then jaunt a block over to Emerson and Forest to the Palo Alto Laundry, run by Josaburo and Rina Okado.   Now that you’re ready to go home, stroll lazily back to 827 Ramona Street, to the University Hotel*, owned and operated by Genshichi and Riye Okazawa.  Your Issei friends rent there before finding more permanent housing. You like living there because it also caters to young Japanese students attending Leland Stanford Junior University.    It’s a cool Autumn day in November of 1909, and you decide to check in at the Japanese Employment Agency for a job.   So convenient that it’s inside the hotel, isn’t it?  Just then you notice a group of well dressed men, two of whom are Caucasian, which piques your interest.  After all, this is an immigrant community full of Japanese, a few Chinese, even French and German families.    You overhear their discussion in the first floor basement and then they conclude their business.  You run to the window of the hotel’s barber shop, to see them walking out to the street and notice them posing for a photo.   What’s going on here?   It turns out these men are here to start our church.  The Aldersgate United Methodist Church, although it would be known as the Japanese Methodist Episcopal Church (JME) at first.  In fact, the tiny neighborhood that centers on Ramona Street is filled with Issei who speak little to no English, and their families, just like you.  It’s a thriving community of hard workers and you feel comfortable there, perhaps even insulated.   Inside the Okazawas’ University Hotel (see neighborhood map) is where Aldersgate United Methodist Church had its inaugural meeting in November 1909.  In fact, our fledgling church is just part of a neighborhood that consists of a few blocks of some 200 Japanese centered on Ramona and Emerson, flanked by Forest to the north, and Channing to the south.   Hundreds of Japanese and other immigrants lived in the Ramona neighborhood before World War II.  This map is a representation of those residents spanning the 1909 to 1930s time frame.  The information was taken from address directories, the Federal census and local maps of the period, with data that sometimes conflicted.   *Genshichi commissioned his house the “University Hotel,” probably to attract more students to his place of business.  He may have also called it the “Stanford Hotel” as well and used the two names interchangeably.  Genshichi’s home certainly didn’t look like a hotel.  The word hotel in Japanese refers to a structure of some size and modern build, so Genshichi may have called his place a hotel to better attract a bride, as it was common practice for Issei men to exaggerate their wealth.1   Sometime later he changed his mind and called his home a boarding house instead of a hotel. If you would like to download the first 25 pages of the Aldersgate 100th Anniversary history book, click here for the PDF.  It includes a list of the ministers, interviews with Niseis Soyo Takahashi and Rose Kimura, who grew up in the neighborhood of the Ramona Street church, local racism, a story about how tuberculosis changed the life of Nisei teen Ethel Hirano before WWII, and excerpts from Kiyo Sato's diary about Nisei life in Palo Alto pre-war. PAGE MILL CHURCH 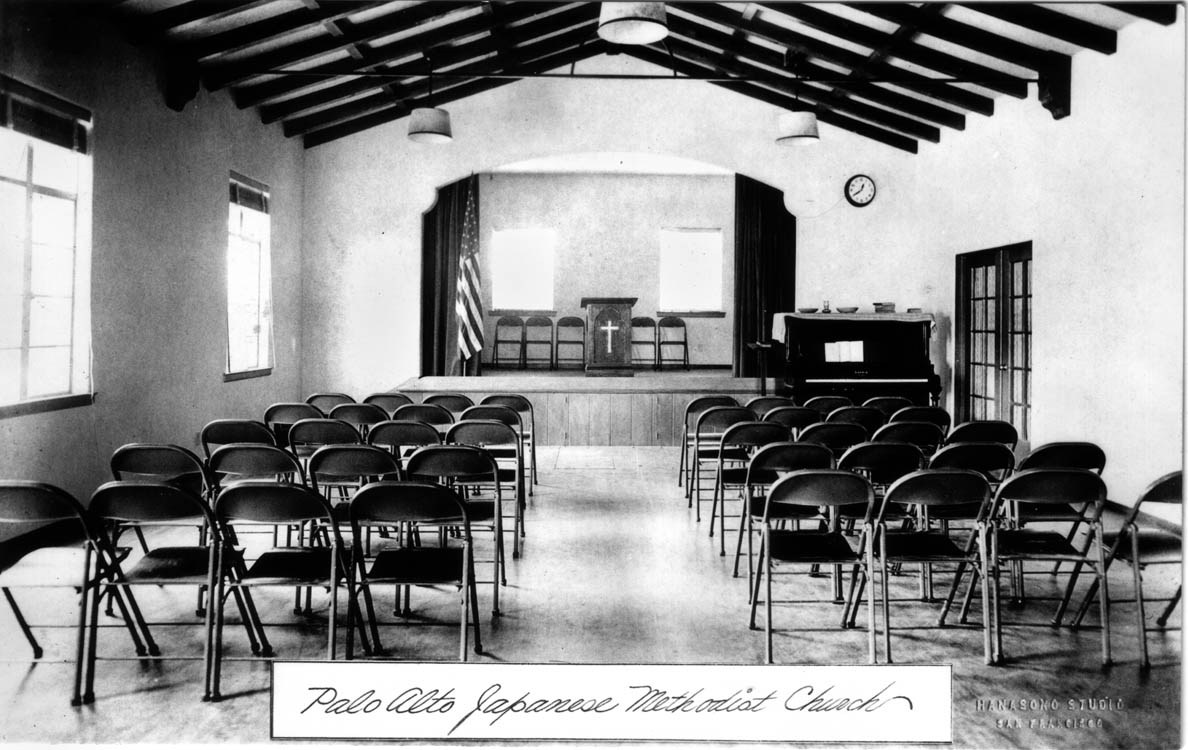 After 26 years of moving from house to house, a permanent location for our church was needed.  For the first time, we purchased land with an old cottage at 306 Page Mill Road, Mayfield, for $1,200 in August 1935. Incorporated in 1937 as the Japanese Methodist Episcopal Church of Palo Alto, we started a fund that same year to construct a new building on the property.    The old cottage had become worn, and the roof leaked when it rained. Members Hideo Furukawa, John Kitasako, Bill Sasagawa, and Kiyo Sato spoke at several local churches, appealing for funds in January 1939. 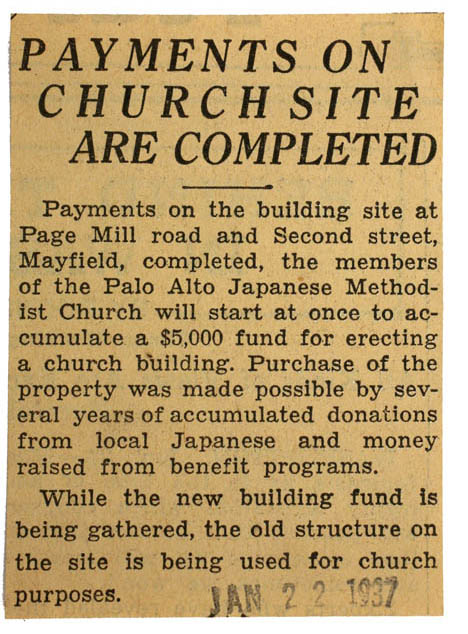 On April 14, 1940, we completed and dedicated our first permanent church and changed our name to Page Mill Methodist Church.  Total cost of the church was $8,400, comprising $1,200 for the land, $6,800 for the building and $400 for furniture and fixtures. The Issei raised $1,350 from motion picture benefits, a phenomenal amount in those days.   Why was the Mayfield area chosen for Page Mill?  Mike Kiya recalled that there was a Palo Alto ordinance that kept us from owning property there, so a Mayfield location was chosen instead.  “We were on the wrong side of the tracks,” he said, referring to the East side. Perhaps coincidentally, the previous location at 472 Sheridan wasn’t very far away.    It may have been simple as that, according to Jay Sasagawa.  “The property became available,” Jay said.  “The Furukawas lived there before the war, right next door was the Otomoris.”  Ultimately the Ushiros, Yoshidas, Kaneshiros and Okazawas would live there, too.   Just a few years after our new building was occupied, the war broke out between America and Japan.   Right after Pearl Harbor, an ad hoc group called the Evacuee Service Committee was formed from young adults from the Japanese community to analyze the evacuation problem.  Page Mill offered its building as a repository for personal effects and furniture.  Alon Wheeler took care of these items. WORLD WAR II and the INCARCERATION OF THE JAPANESE in AMERICA 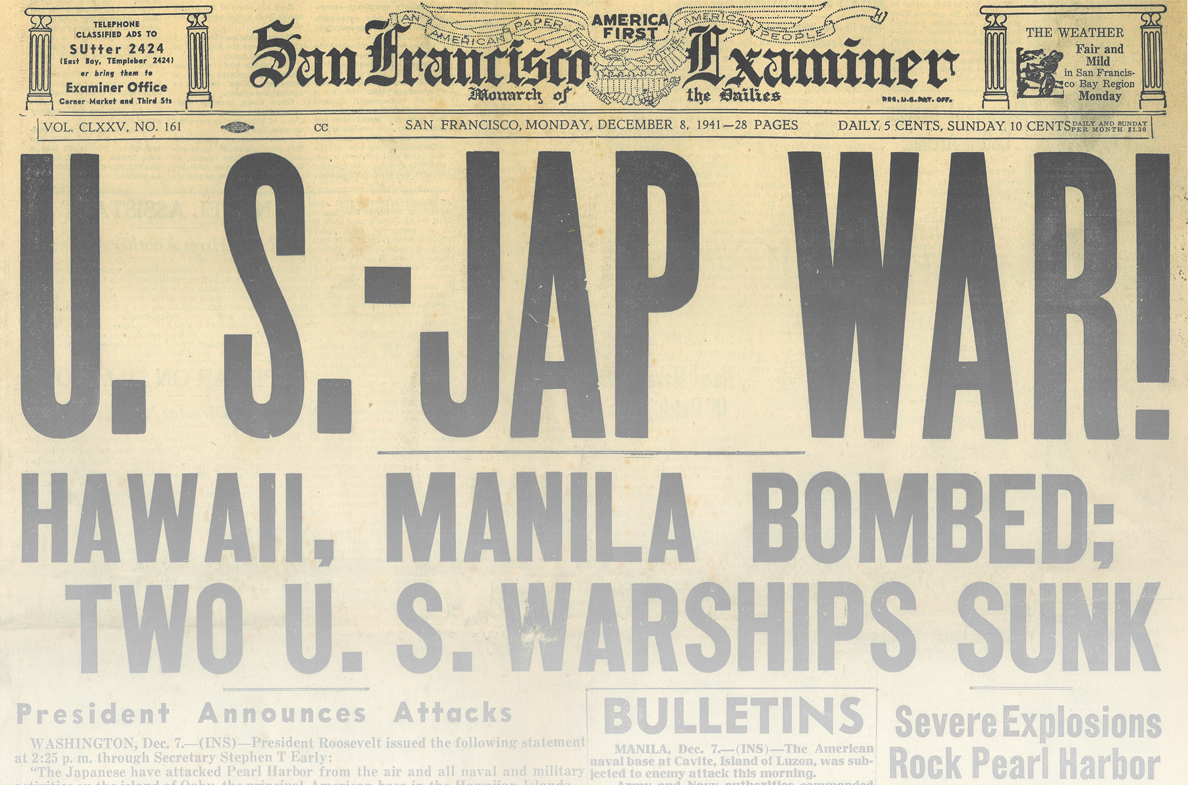 It was a day like any other, until you picked up the December 8 newspaper and read about the attack on Pearl Harbor.  Fortunately, it appears that the Palo Alto newspapers and community were relatively calm about it, in comparison to the San Francisco Examiner, pictured above.   An editorial stating that “We are at war with Japan, not our Nipponese neighbors” ran in the December 8 issue of the Palo Alto Times.  The next day, Arthur Okado of the Palo Alto Laundry and the Japanese American Association of Palo Alto was quoted in a Times article, affirming the loyalty of local Japanese Americans. Still, as the week moved on, more articles appeared about the attack and local response to it.  The trials of two of our church families are chronicled below, beginning with Mary and Kimi Tsukushi: 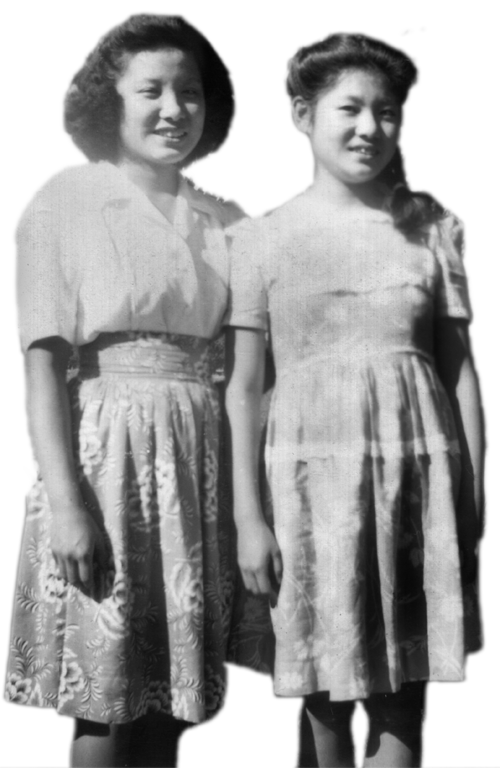 The Tsukushi family members were voluntarily evacuating from their home in Redwood City in March 1942.  Hiromasa and Misaye Tsukushi, daughters Kimi and Mary (above left), and others were on their way to Rocky Ford, Colorado, because Hiromasa’s cousin lived there.  They stopped in Fresno to visit the Kusakai family and had finished eating at a local Chinese restaurant when the trouble began.   Mary Tsukushi recalled that a young cousin had left his toy inside the restaurant, so Uncle George Tsukushi went back in to get it. When he walked out, he was flanked by two large police officers who were not happy that a group of Japanese were traveling in their city. 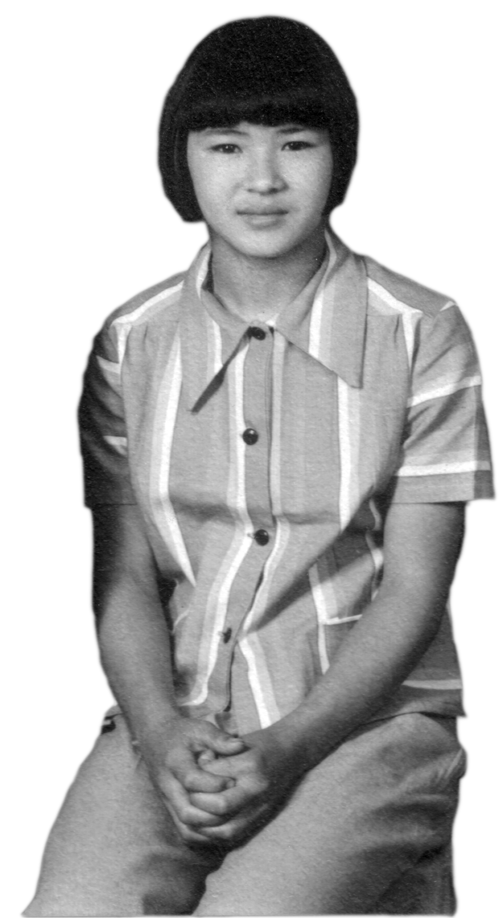 “He was coming with two policemen on either side,” Mary said. “The police must have called a paddy wagon.”    Kimi recalled that “Father kept yelling at them, ‘We have a permit, we have a permit!’” referring to their official travel permit.  “They let us go, but it was really scary.  They were going to take George away, because he was Japanese.”   As a 10-year-old growing up on a grape ranch in Lodi, Susie Masuda (now Sasagawa) had enjoyed climbing the tree in front of their house.  After Pearl Harbor was attacked, it ceased to be fun.   We’d climb the walnut tree to see if my father was coming home,” Susie said.  “We did that week after week to see if he was coming home to us.”   Her father, Taro Masuda, had been taken away by the FBI.  He had been targeted because he was one of the community leaders in town.   “They told him to grab his coat and toothbrush, that’s all he could take,” although he also took the hat he always wore. “We didn’t know where he was for close to a month.”    Pearl Harbor changed a lot of things for the Masudas.  The piano Taro had bought in Stockton was returned.  A picture of the Emperor that had been hanging in the house was either buried or thrown out.  “It really interrupted the lives of Japanese community,” Susie said.   “It came over the radio,” Susie said.  “They heard that Pearl Harbor was bombed and they couldn’t believe it, the Issei, and then the fear went through me.  Now what will happen to us?  I never even thought about war.  But I know my parents felt fear.” The Masudas would end up Crystal City, Texas, which was NOT one of the 10 internment camps. It was a camp that President Franklin Roosevelt had secretly created to act as a prisoner exchange facility. Some of the Japanese families there would volunteer to return to Japan, some families were forced to return, and some stayed in America. The Masudas would remain in the United States and Susie would later marry Jay Sasagawa. Before the war, the Sasagawas had been early members of Page Mill Church and returned the Palo Alto to start their lives anew. Those who returned to Japan found it to be a foreign country. They were viewed as traitors who had left the motherland. Issei men in particular were devastated as their ships entered Tokyo Bay. Losing was unthinkable to the Issei, who were devoted to the Emperor and believed he was a living god. To surrender was an enormous shock to the Japanese who believed in their hearts that Japan had won the war, regardless of the news stories they had read or heard. Some of these families decided to go back to America, although that process would take years.
Contact
Follow Us

Use this space to let people know why they would want to hear from you. Tell them about a special offer, a limited time promotion, or the important updates they'll receive after they sign up.